Securonix Threat Labs has been continuously monitoring threats targeting and leveraging the crisis in Ukraine in recent weeks and seen a significant increase in cyberthreats. MuddyWater, HermeticWiper and SandWorm are actively being used to launch cyberattacks, including DDoS attacks targeting financial institutions, cyber espionage campaigns and infrastructure.

We provide guidance for detecting attacks by advanced persistent threats in this update.  Of note are the top three data sources swept against on Autonomous Threat Sweeper that include antivirus/malware/EDR, cloud antivirus/malware, and endpoint management systems. For a full list of IOCs, search queries on Securonix SNYPR used on to detect MuddyWater, HermeticWiper, Cyclops Blink, malware, please refer to our updated Github page. 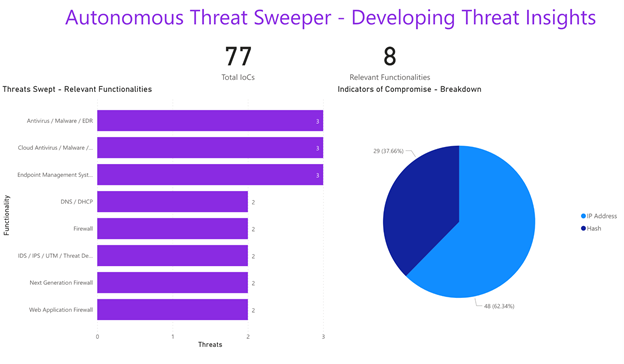 Last Friday, the Conti group, believed to be based in the city of Saint Petersburg, said it was announcing its “full support” for retaliation against a cyberattack against Russia. The Conti blog post stated that “If anybody will decide to organize a cyberattack or any war activities against Russia, we are going to use our all possible resources to strike back at the critical infrastructures of an enemy.” After the group’s leaders posted an aggressive pro-Russian message on their official site, a member of the Conti ransomware group believed to be of Ukrainian origin, has leaked details about the group’s communications, which contains some artifacts and sensitive details that can potentially aid detection.

After Russia’s invasion on Ukraine researchers also noticed another wiper attack on Ukraine dubbed as IssacWiper along with HermeticWizard and HermeticRansom. Same code signing certificate was used for the other new malwares too. Researchers also noticed a decoy ransomware written in Go dubbed HermeticRansom to hide the wiper’s action. Currently Threat Labs was unable to attribute these kinds of attacks to a particular threat actor but seeing these geopolitical tensions there are chances these might be originating from Russian sponsored threat actors.

Authorities from US and UK have released a detailed advisory about the recent cyber espionage campaign of MuddyWater which is allegedly state sponsored by Iran and works in the interests of MOIS. In this current campaign they have been mainly targeting government and private organizations from industries including telecom, defense, oil and gas located in Asia, Africa, Europe, and North America. This time they have come up with a variety of malwares ranging from PowGoop, Small Sieve, Mori and POWERSTATS and they have used their most preferred threat vector which is spear phishing campaigns in which they wheedle their targeted victim into downloading ZIP files, containing either an Excel file with a malicious macro that communicates with the actor’s C2 server or a PDF file that drops a malicious file to the victim’s network.

On the evening of  February 23, 2022, the State Service of Special Communication and Information Protection of Ukraine declared that a number of government and banking institutions had undergone a massive DDoS attack. Soon after this announcement, the ESET Research team discovered a new data wiper malware (Win32/KillDisk.NCV) that attacked the Ukraine-wide computer network with the objective of destroying data and causing business disruption. The initial analysis of data wiper malware suggests that it is an executable file signed with a likely stolen certificate issued to Cyprus based company Hermetica Digital Ltd. Hence, the researchers named malware as ‘HermeticWiper’.

Authorities from US and UK have come across a new strain of malware dubbed as Cyclops Blink which is said to be a replacement of a very infamous malware called VPNFilter which created  havoc by infecting half a million routers a few years back. This malware has been attributed to a famous APT group called Sandworm who is formally connected to Russia’s GRU unit and was associated with a major power outage in Ukraine in 2015. Cyclops Blink has been deployed since 2019 and has already been infecting the WatchGuard Firebox manufactured by Seattle based firm WatchGuard and possibly infecting SOHO routers too.

Please refer to our Github page that is updated daily. We also invite you to send your questions regarding critical security advisories to the Securonix Critical Intelligence Advisory team and look forward to being of assistance.

Note: These queries in Silo may be prone to false positives and we recommend leveraging it with other stages of the attack progression to increase the likelihood of true positives.