The Monthly Intelligence Insights provides a summary of industry leading top threats monitored and analyzed by Securonix Threat Labs during the month of August. The report additionally provides a synopsis of the threats, indicators of compromise (IOCs), tactics, techniques and procedures (TTPs), and related tags. This may be followed by a comprehensive threat summary from Threat Labs and search queries from the Threat Research team. For additional information on Threat Labs and related search queries used via Autonomous Threat Sweeper to detect the below mentioned threats, refer to our Threat Labs home page.

During the month, Threat Labs analyzed and monitored multiple major threat categories, including several ransomware operations, malware campaigns, attacks on hospitality and travel firms, persistent phishing and credential theft campaigns leading to intrusions and data theft from Russia and the SEABORGIUM threat actor. Of note was an attack in the beginning of the month on Cisco by Yanluowang ransomware group which breached its corporate network in late May. The attackers could only harvest and steal non-sensitive data from a Box folder linked to a compromised employee’s account. The vulnerability was identified in the Ring Android app that exposed the data and camera recordings of Ring app users on Android devices. 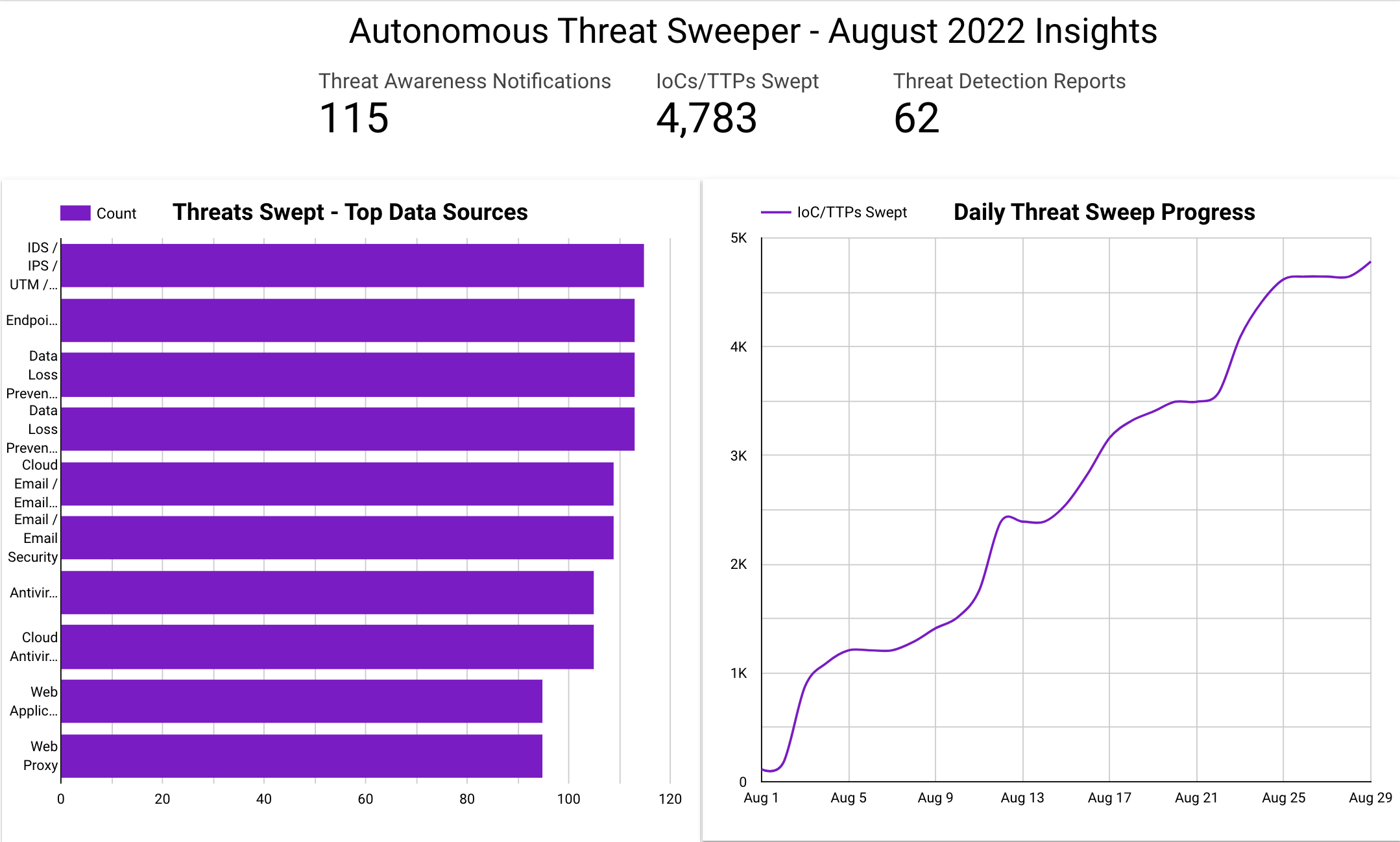 According to Cisco, on 24 May 2022, the Yanluowang ransomware group breached their corporate network. It was caused by a phishing attack targeting one of their employees’ Google accounts that contained corporate credentials. In addition, the hackers were only able to find and steal non-sensitive information from the folder in that employee’s account. Cisco reported that the threat actor has been removed from the environment and has shown persistence by repeatedly attempting to gain access in the weeks following the attack. However, none of these attempts were successful.

TTPs related to the threat actor/vector that can be detected include but are not limited to the following. We recommend these actions:

An offensive framework developed by Chinese threat actors called Manjusaka, which is related to Sliver and Cobalt Strike, has been observed targeting both Windows and Linux. In addition to being fully functional, the command and control framework has a user interface in simplified Chinese and can generate new implants with customized configurations easily, increasing the likelihood that malicious actors will adopt this framework more widely.

Securonix Threat Labs has continued to monitor top malware activities and observed the IcedID threat that has been circulating lately. This IcedID malware continues to be an active malware in our current threat landscape.

This month the IcedID threat circulated multiple times with different exploits. IcedID is a service provider that has been tracked as a direction to ransomware, but also has been noted on the “dark web” service that can be used to load some of the ransomware itself.

This month multiple researchers from Walmart Global Tech Blog, Palo Alto Unit 42 Intel, and ISC SANS published their analyses and observations. Walmart Global tech Blog mentioned PrivateLoader continues to function as an effective loading service, recently leveraging the use of SmokeLoader for their payloads. By collecting some sample domains it indicated that these domains are simply proxies but behind them sits a massive operation performing millions of loads for various customers. Also, Palo Alto Unit 42 Intel Unit monitored OSINT sources and identified a new infection of IcedID delivering CobaltStrike which was posted on Twitter reporting that the IcedID (Bokbot) infection led to CobaltStrike. An ISC SANS researcher further provided their analysis of IcedID malware using Dark VNC activity and Cobalt Strike. This method was used by threat actor Monster Libra (also known as TA551 or Shathak) who has started distributing a new IcedID infection generated from a password-protected zip archive sent by Monster Libra.

TTPs related to the threat actor/vector include but are not limited to the following. We recommend these actions:

This month both CISA and the FBI have observed and warned about the revival of the Zeppelin malware targeting a range of critical infrastructure organizations by exploiting RDP and firewall vulnerabilities.

First seen in 2019, the agencies warn that Zeppelin ransomware is back recruiting new exploitations and encryption tactics in campaigns against industries particularly healthcare and critical infrastructure organizations.

Recently, ‘Dark Utilities‘, a C2 platform that provides adversaries with full-featured capabilities, was released. It is marketed as a method of enabling remote access, command execution, distributed denial-of-service (DDoS) attacks, and cryptocurrency mining operations on infected systems. Additionally, It supports Windows, Linux, and Python implementations at a starting price of just EUR 9,99. The servers are hosted in the Interplanetary File System (IPFS), making them resilient to content moderation and law enforcement interference.

A Russia-linked threat actor SEABORGIUM’s phishing campaign was interrupted by Microsoft. The campaign is persistent hacking and targeting people and organizations in NATO countries for credential and data theft, intrusions, and hack-and-leak campaigns tied to espionage.

The threat actors have been using the information to impersonate individuals known to the target and contacted them using new email accounts with email addresses or aliases configured to match the names or aliases of the impersonated individuals, Microsoft said.

Orchard, a new botnet, uses the account transaction information of Bitcoin creator Satoshi Nakamoto to generate domain names in order to hide its command-and-control infrastructure (C2). An important characteristic of this botnet is that it belongs to a family of botnets that uses DGA technology. Its latest version is for mining and using more unpredictable information, such as transaction information of Bitcoin accounts, as input to DGA, making detection more difficult. It has appeared in three different versions with varying programming languages and DGA implementations, indicating the Orchard botnet family remains active and demands our attention. Additionally, it infects USB storage devices to spread malware by uploading device and user information.

Small threat actors, namely the TA558 group, are targeting hospitality, hotel, and travel organizations primarily with Portuguese and Spanish speakers. The group operates typically in Latin America, but they are also targeting Western Europe and North America. It uses multiple malware in its attacks, including Loda RAT, Vjw0rm, and Revenge RAT, by using phishing campaigns with hotel booking lures. As a result, the malware was repurposed to steal personal and financial data from hotel customers, including credit card information, perform lateral movement, and deliver additional payloads.

TTPs related to the threat actor/vector that can be detected include but are not limited to the following. We recommend these actions:

For a full list of the search queries used on Autonomous Threat Sweeper for the threats detailed above, refer to our Github page. The page also references a list of relevant policies used by  threat actors.

Are You Risk-ready? A Risk-based Approach to Security Maturity