The Monthly Intelligence Insights provides a summary of curated industry leading top threats monitored and analyzed by Securonix Threat Labs during December. The report additionally provides a synopsis of the threats, indicators of compromise (IOCs), tactics, techniques and procedures (TTPs), and related tags. This may be followed by a comprehensive threat summary from Threat Labs and search queries from the Threat Research team. For additional information on Threat Labs and related search queries used via Autonomous Threat Sweeper to detect the below mentioned threats, refer to our Threat Labs home page.

Furthermore, a number of vulnerabilities were found in Adning and Kaswara plugins. In addition, Raspberry Robin malware is targeting the telecom AND government sector. Also, identified a new Trojan dubbed as CryWiper which is targeting Russian courts and mayoral offices. 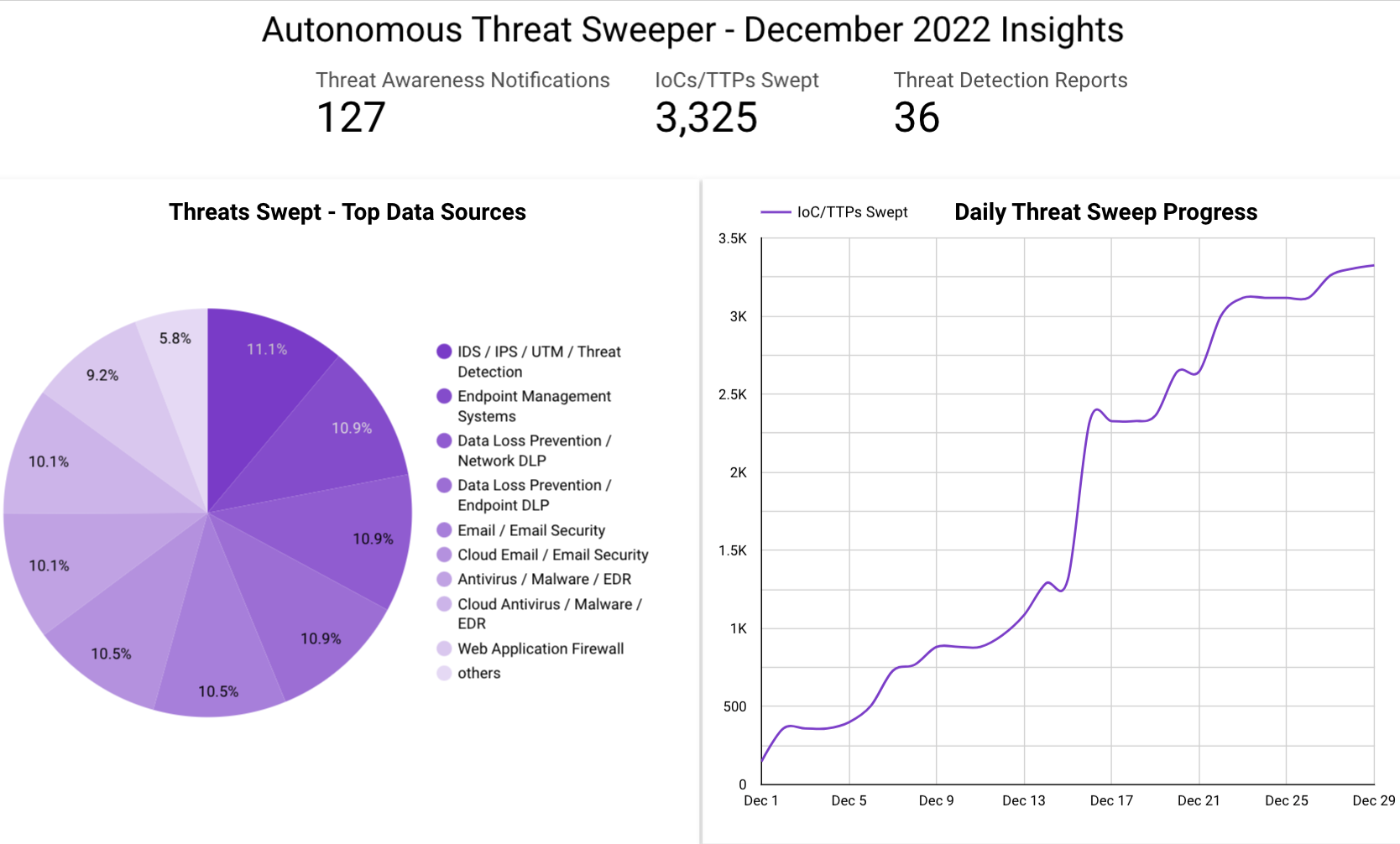 On December 2 Kaspersky shared that they had discovered a new Trojan which was named CryWiper. For now it was pointing out that CryWiper only targeted Russian courts and mayoral offices, but could change in the future.

CryWiper, named for the distinctive ‘.cry’ extension which it appends onto files, appears on first impression to be a new ransomware strain. Victims’ devices seemed encrypted and a ransom note was left demanding money be sent to a bitcoin wallet address. However, the files are actually corrupted beyond recovery.

The Trojan corrupts any data that’s not crucial for the functioning of the operating system. It doesn’t impact files with extensions .exe, .dll, .lnk, .sys or .msi, and ignores several system folders in the C:Windows directory. The malware focuses on databases, archives, and user documents.

TTPs related to the new CryWiper Trojan include but are not limited to the following:

Ransomware incidents continued this month. Microsoft revoked several hardware developer accounts after drivers signed through their profiles were used in cyberattacks, including ransomware incidents. Multiple researchers including Mandiant explain that threat actors are utilizing malicious kernel-mode hardware drivers whose trust is verified with Authenticode signatures from Microsoft’s Windows Hardware Developer Program. The criminals signed their AV-killer malware, closely related to one known as BURNTCIGAR, with a legitimate WHCP certificate.

During the investigation of this suspicious activity on a customer network, researcher Sophos X-Ops’ rapid response team found a pair of files left behind on some compromised machines. The two files are tied together to terminate processes or services used by a variety of endpoint security product vendors.

Because the rapid response team blocked the attackers from the systems to stop their malicious actions, they weren’t sure how to figure out which ransomware the attackers meant to deploy. However, methods used and files left behind offer an intriguing clue about the group behind the attack.

In their analysis Sophos X-Ops found that the pair of executable files — a cryptographically signed Windows driver (signed with a legitimate signing certificate) and an executable “loader” application meant to install the driver — were used in a failed attempt to disable endpoint security on targeted machines.

Prior research by other companies indicate that threat actors who used this tool in attacks later attempted to deploy ransomware called Cuba.

Upon analysis, real and fake payloads were found in the main malware routine. When sandboxing tools detect the malicious code, the fake payload is loaded; however, the real payload remains hidden under packing layers and connects to Tor later.

After being installed, a custom Tor client embedded in the malware connects with the hard-coded .onion address and waits for further instructions from the real payload using shared memory once installed. In the Tor client process, the real payload uses the name of a legitimate Windows process like dllhost.exe, regsvr32.exe, and rundll32.exe.

In the another campaign, Microsoft researcher spotted an upgraded version of Zerobot (aka ZeroStresser) that was able to attack more Internet of Things (IoT) devices and exploit vulnerabilities in Apache and Apache Spark (CVE-2022-33891 respectively) as well as enhanced DDoS attack capabilities.

Insecure devices with default/weak credentials can be exploited by the Zerobot botnet through brute force attacks. In their study, researchers observed the bot trying to access the device through SSH and Telnet on ports 23 and 2323 by using eight common usernames and 130 passwords for IoT devices. Furthermore, they detected numerous attempts to connect to SSH and telnet ports 22 and 23, as well as attempts to open ports through port-knocking on 80, 8080, 8888, and 2323.

Securonix Threat Labs was following up actively monitor running campaigns by multiple threat actors that are targeting world-wide as they began spreading rapidly once again.

TTPs related to the a Zerobot include but are not limited to the following:

According to a WeliveSecurity advisory, Agrius, a new Iranian group targeting victims in Israel and the United Arab Emirates since 2020 initially distributes a wiper. Recently the group deployed a new wiper named Fantasy. Most of its code base comes from Apostle, Agrius’s previous wiper. In December, FortiGuard Labsteam observed a new botnet written in the Go language being distributed through IoT vulnerabilities and categorized it as critical. This botnet, known as Zerobot, contains several modules, including self-replication, attacks for different protocols, and self-propagation. It also communicates with its command-and-control server using the WebSocket protocol. The report showed how this malware leverages vulnerabilities and examines its behavior once inside an infected device.

TTPs related to the a new wiper Fantasy include but are not limited to the following:

Fortinet warned customers to upgrade the installs to fix an actively exploited FortiOS SSL-VPN vulnerability, tracked as CVE-2022-42475. This vulnerability has a CVSSv3.1 score of 9.3 and lets attackers obtain remote code execution on the Fortinet SSL VPN systems by sending a special masquerading request due to a heap-based buffer overflow vulnerability in the FortiOS SSL VPN service.

Once again Iranian exploitation activities are continuing as of December 2022. PHOSPHORUS TTPs include the likely exploitation of common exploits like Log4J and ProxyShell to target unpatched vulnerable systems. The group targets energy, government, and technology companies based in Europe, the Middle East, the United States, and other countries/regions.

According to telemetry data, 107[.]173[.]231[.]114 remains active, and security vendors have reported that it is believed PHOSPHORUS activities are associated with a common command and control (C2) server (107[.]173[.]231[.]114 – ColoCrossing, US). There are also several domain names that have similar structures that are associated with this IP address based on passive DNS information.

In another, one of the new malicious attack campaigns identified by Securonix Threat Research team that is targeting victims who are likely to be government employees and the threat actor tracked as STEPPY#KAVACH.

It has been observed that .LNK files are used to execute code that leads to the downloading and execution of a malicious C# payload that functions like a remote access trojan (RAT).

By using phishing emails, attackers entice users into opening a shortcut file (.LNK) that executes a remote .HTA payload using mshta.exe Windows utility. Furthermore, there are many similarities between this STEPPY#KAVACH attack campaign and previous campaigns launched by APT36 / SideCopy / TransparentTribe, all of which originated in Pakistan.

TTPs related to the a STEPPY#KAVACH include but are not limited to the following:

For a full list of the search queries used on Autonomous Threat Sweeper for the threats detailed above, refer to our Threat Labs home page. The page also references a list of relevant policies used by threat actors.