Whenever a new vulnerability is disclosed, a race begins between defenders and attackers to execute their own action chain to either exploit or mitigate the vulnerability. For an attacker, the three phases are:

From Exploit to Breach

In most cases, attackers have a head-start, typically of several days, but in many cases there may be a gap of even weeks to months [1]. The gap between when attackers are able to weaponize and exploit a vulnerability and when defenders can assess if they are exposed and deploy mitigating controls (mean time to respond or patch) is a window of vulnerability for organizations and one of opportunity for attackers. Adversaries can often act with impunity if no additional mitigating controls are deployed.

Ultimately, the goal of attackers is to obtain and maintain a first-mover advantage. Defenders aim to close and eliminate the resulting exposure gap.

Attackers and defenders go through cycles of adapting and counter-adapting. 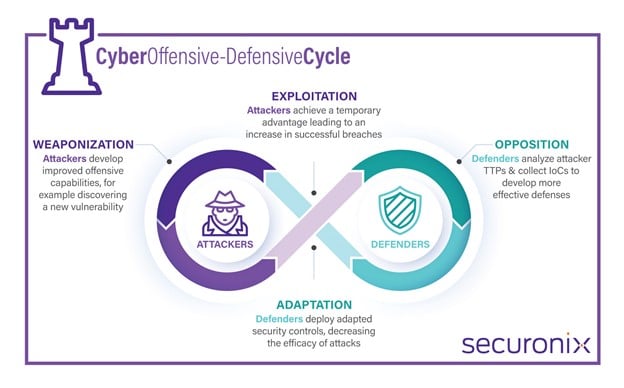 Log4j was not a single incident or event. Instead, it was an ongoing crisis with many peaks and troughs, and multiple laps around the attacker-defender adaptive cycle.

The original vulnerability resulted in multiple restarts of the attacker-defender race, as Apache released several different updates leaving security teams to go back and repeat most of the work they had just done.

In parallel, reports of exploitation by attackers in the wild increased, adding further pressure on security teams.

There were only four days between the disclosure and widespread dissemination of the vulnerability and reports of mass exploitation.

December 10 CVE-2021-44228 is published on the National Vulnerability Database [2], kicking off a media storm.

December 12 Reports begin circulating widely that mass exploitation in the wild is being seen by many researchers and vendors.

ATS in action* and how the solution was able to detect the Log4j vulnerability in one day.

As threats evolve and increase while dwell time decreases, organizations are under pressure to detect security gaps almost immediately. Securonix Autonomous Threat Sweeper can retroactively analyze past activity, making it a critical tool for security teams to improve their mean time to respond and ultimately minimize risk to their organizations.