In this series of articles, I will be introducing basic and advanced concepts of security data science, written with the security executive in mind. In the security industry especially, it can be hard for executives to gain down-to-earth insight into this complex topic. It is my hope that this series will provide transparency, dispel myths, and equip executives with the necessary background to make good buying decisions and to take full advantage of machine learning in security operations.

The history of security data science — my lived experience

Data science is a relatively new field. While the term can be traced to John Tukey’s 1962 paper, “The future of data analysis”, the birth of an actual profession only began in the early 2000s. In security, adoption began in earnest in the 2010s, with the introduction of data scientists into security product R&D teams. More recently, we began seeing large enterprise security teams incorporate data scientists in operational/research settings, designing custom tools for SecOps.

As one of the early researchers in data-driven methods for security, I have seen almost the entire history of my profession. Starting my career as a security data scientist in 2000, my title was “statistician”, up until 2014. Before that, I spent almost 15 years at Los Alamos National Laboratory (LANL), working with incident response teams and the intelligence community. LANL is a US Dept of Energy security laboratory, responsible for conducting future-leaning research in all things national security. As a result of visionary leadership, I was asked to insert myself into a cyber research team. They said “Hey, he’s a statistician, they’re good with data. In security we have lots of data, let’s see what he comes up with.” To that end, I sat in the room with incident response, forensics, and later, as threat hunting emerged, to see how I could help.

Back then, I asked a lot of strange questions, like why don’t you add up all the numbers and divide by how many there are (take the average)? The IR folks were often confused as to why I wanted to do such strange things, but ultimately, my motives were to:

Let me give you an example from my experience to make things more concrete. At LANL, we found that lateral movement is one of the hardest behaviors to detect. Yet, lateral movement was present in nearly every serious incident we observed. It was something we called an “attack invariant”. It didn’t matter what the adversary wanted to do, they inevitably moved laterally. It was also very behavioral…there are no smoking guns with lateral movement. It can be done using living-off-the-land techniques that look very much like normal enterprise behavior. Lateral movement had the right components for me to tackle: important, hard to detect, and behavioral. 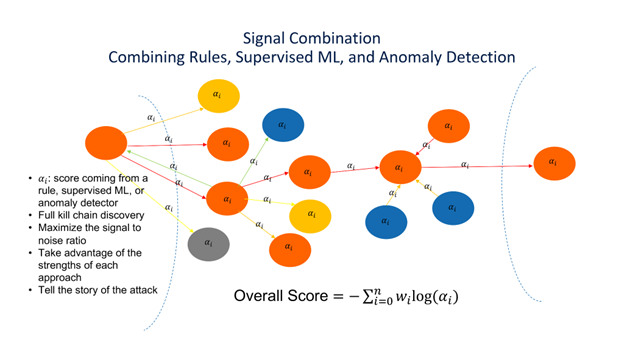 A conceptual diagram developed during my work on PathScan. Nodes are assets, edges are the flow of an attack through the enterprise. We see Initial penetration via phishing (left most node), followed by reconnaissance, lateral movement, data staging, and exfiltration. All individual elements are scored (the alphas), and an overall score for the attack is computed. 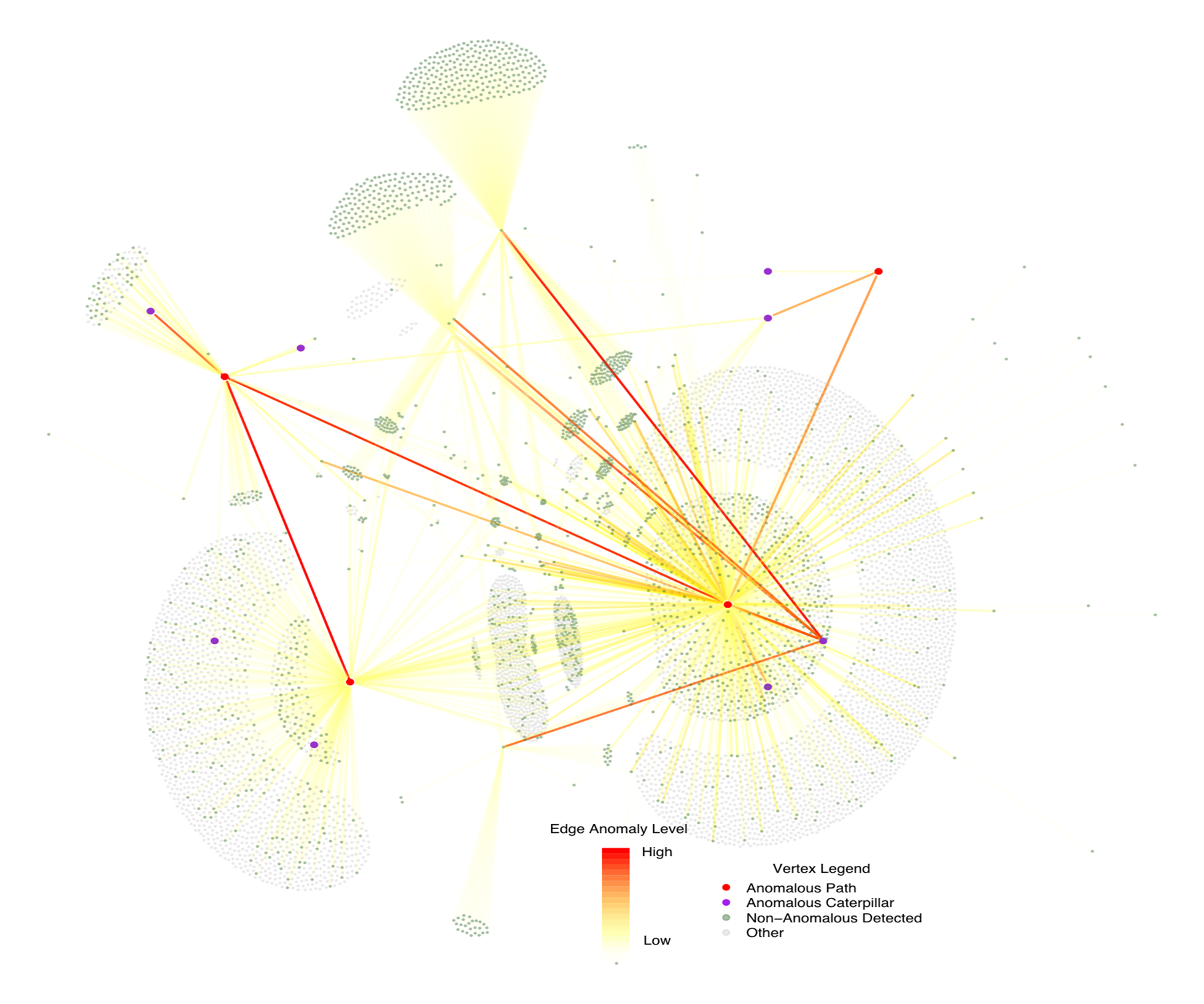 A real attack involving lateral movement within a large enterprise network, detected by PathScan.  Color is proportional to anomaly level, and one can see the multihop behavior as the attack proceeded along the red path.

My approach? Watch the human analysts, and ask “how do they determine lateral movement?” The answer is complicated and very context-dependent, but several points emerged:

To incorporate these elements of human analyst behavior, my team at LANL developed PathScan, a network anomaly detection tool designed to find lateral movement. It used statistical modeling to characterize normal behavior between machines, and then identified paths of anomalous multihop communication. PathScan proved to be effective in detecting lateral movement, and was adopted by US government entities and eventually licensed by Ernst & Young for use as part of their managed security services. The key lessons I took away were:

6 lessons I learned from security teams

After observing operational teams over the intervening years, here are some key lessons I’ve learned:

As a result, while supervised ML, including deep learning, can and should be used when labels are available, it is not as applicable as it is in many other industries.

Guidelines for successfully utilizing data scientists in your security organization

I’ve learned a few hard lessons working in industry security research about how to gain the most out of a security data science team:

Security data science teams need a variety of skills, and you can’t hire them in one person.  Hire for full stack teams, not full stack people.

Over the last 20 years, I have seen tremendous uplift in the ability to bring data science to good effect in security settings. The foundations needed to support our approaches have matured to a point where we are finally positioned to be effective. We have increased our sensing and data capture capabilities exponentially. You can’t do data science without good data, and since the best methods are those which seek tons of context, you can’t do data science without holistic data.  We have cloud infrastructure and big data computing in a mature set of tools. The cloud is a game changer for data science in so many ways. There is a whole profession around security data science, with many thousands of researchers in the industry. It is an amazing experience to have gone from the early days, where I was a very strange member of a security team, to leading large product data science teams bringing real solutions to the market. My perspective is: We are just beginning to realize our full potential as security data scientists, the best is yet to come!

To find out how in detail we are going to realize our full potential, join me in this series of further blogs, where we will be diving into:

What Being on the Inc. 5000 List Means for Securonix