The Monthly Intelligence Insights published by Securonix Threat Labs provides a summary of the total number of threats tracked and highlights the top threats during the month. It also provides a synopsis of the threats, indicators of compromise (IoCs), tactics, techniques and procedures (TTPs), and related tags. This may be followed by a comprehensive threat summary from Securonix Threat Labs and search queries from the Securonix Threat Research team. For a full list of the search queries used on Autonomous Threat Sweeper to detect the below mentioned threats, refer to our Github page.

Threat Labs has analyzed and monitored multiple ransomware operations and espionage campaigns targeting Ukraine and the United States for the month of February. These include MuddyWater, HermeticWiper, IssacWiper, Cyclops Blink, LockBit 2.0, BlackByte ransomware activities, and a recent TrickBot campaign. Additional threat campaigns worth noting include Medusa and Flubot, where two threat actors collaborated to target more than 56 mobile banking applications across the US, Spain and Turkey. This will be an ongoing trend where threat actors continue to collaborate to achieve a common goal. 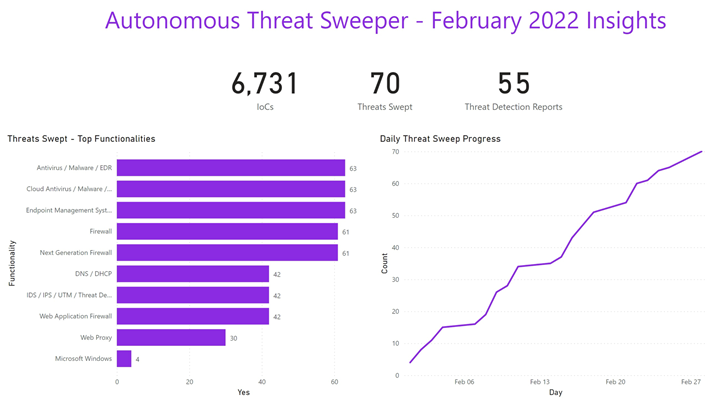 After Russia invaded Ukraine, researchers identified multiple strains of wiper malware targeting Ukraine, subsequently dubbed IssacWiper, HermeticWizard, and HermeticRansom. Interestingly, each malware leveraged the same code signing certificate. Researchers also noticed a decoy ransomware written in Go, dubbed HermeticRansom, to obscure the destructive actions of the malware. As of publishing, these threats have not been attributed explicitly to a particular threat actor, but as geopolitical tensions rise in Eastern Europe, additional and related evidence may be unveiled to a potential nation-state actor.

Authorities from the US and the United Kingdom have released a detailed advisory regarding the cyber espionage activity of MuddyWater, which is an advanced persistent threat (APT) actor purportedly state-sponsored by Iran and works in the interests of the Ministry of Intelligence (MOIS). MuddyWater has been targeting a range of government and private organizations from multiple industries across the globe, including telecom, defense, oil and gas. MuddyWater leverages multiple families of malware in their actions, ranging from PowGoop, Small Sieve, Mori and POWERSTATS, via their preferred threat vector of spear-phishing campaigns, in which they wheedle their targeted victim into downloading ZIP files, containing either a Microsoft Excel file with a malicious macro that communicates with MuddyWater’s Command and Control (C2) server or a PDF file that drops a malicious file to the victim’s network.

On the evening of February 23, 2022, the State Service of Special Communication and Information Protection of Ukraine declared that a number of government and banking institutions had undergone a massive Distributed Denial-of-Service (DDoS) attack. Soon after this announcement, the ESET Research team discovered a new data wiper malware (Win32/KillDisk.NCV) that attacked Ukraine’s computer network nationwide with the objective of destroying data and disrupting businesses. The initial analysis of data wiper malware suggests that it is an executable file signed with a likely stolen certificate issued to a Cyprus-based company Hermetica Digital Ltd. Hence, the researchers named malware as ‘HermeticWiper’.

Authorities from the US and UK have come across a new strain of malware dubbed Cyclops Blink, which is said to be a replacement of an infamous malware called VPNFilter which wreaked havoc by infecting half a million routers in 2018. This malware has been attributed to a well-known APT group called Sandworm, which is formally connected to Russia’s military intelligence unit (GRU) and associated with a major power outage in Ukraine in 2015. Cyclops Blink has been in the wild since 2019 and has expanded its targets to small office/home office routers (SOHO) including but not limited to the WatchGuard Firebox.

Researchers from CheckPoint have analyzed a campaign by TrickBot operators who have been targeting major global organizations, the majority of whom are financial institutions. TrickBot leverages multiple on-demand modules including anti-analysis techniques which makes it difficult for security researchers to send automated requests to C2 servers to receive fresh web-injects. According to additional research from AdvIntel, the TrickBot campaign has been taken over by Conti ransomware operators, taking advantage of TrickBot’s sophisticated nature to gain initial access to their victims’ corporate network.

In the second week of February, the FBI released an advisory regarding the indicators of compromise (IoCs) for BlackByte ransomware. Multiple compromises have been linked to BlackByte since November 2021, where the targets ranged from multiple US and foreign businesses, including entities in at least three US critical infrastructure sectors (government facilities, financial, and food and agriculture). Additionally attackers exploited a known Microsoft Exchange Server vulnerability to gain initial access. As a result of these attacks, victims found a ransom note in all directories where files were encrypted. A day after the advisory was released, the San Francisco 49ers, a US National Football League team, revealed that they had been compromised by BlackByte, as the threat actors listed the team in their victim list on the dark web.

February 2022 began with an FBI Flash report on LockBit ransomware, which listed IoCs and TTPs for LockBit 2.0. The LockBit group operates in the ransomware-as-a-service (RaaS) model and has been actively operating for nearly three-and-a-half years, while constantly shifting their identified TTPs. In the last six months, the LockBit group has attacked more than 50 organizations across multiple industries across the globe per their leak site on the dark web. It was also discovered that the malware comes with a hidden debug window that can be activated during the infection process. Interestingly, LockBit 2.0 will not infect a system if Russian or closely related languages from similar territories are detected.

For a full list of the search queries used on Autonomous Threat Sweeper to sweep for these threats detailed above, refer to our Github page. The page also references a list of relevant policies with the attacker group.

We would like to hear from you. Please reach out to us at [email protected].

Note: The TTPs when used in a silo are prone to false positives and noise and should ideally be combined with other indicators mentioned.