The Monthly Intelligence Insights published by Securonix Threat Labs provides a summary of the total number of threats tracked and highlights the top threats during the month. It also provides a synopsis of the threats, indicators of compromise (IOCs), tactics, techniques and procedures (TTPs), and related tags. This may be followed by a comprehensive threat summary from Securonix Threat Labs and search queries from the Securonix Threat Research team. For a full list of the search queries used on Autonomous Threat Sweeper to detect the below mentioned threats, refer to our Github page.

In the past weeks, Threat Labs analyzed and monitored the Ukraine-Russia conflict where cyber warfare played a major role, additionally covering and tracking numerous attack campaigns against Ukraine throughout the month. Additional prominent threats covered in March involved espionage campaigns by MuddyWater, an attack on ASUS routers by Cyclops Blink malware, and a critical vulnerability identified in the Linux Kernel. 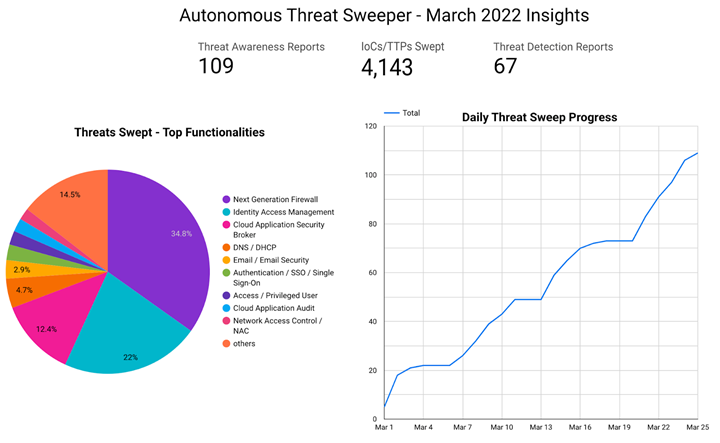 Cyber Warfare Between Ukraine and Russia 2022

As Russia began its invasion of Ukraine in mid-February 2022, multiple threat actors around the world came out in support of both countries and began targeting their respective netizens and organizations. Securonix Threat Labs has been actively monitoring the threats since the cyber warfare actions were identified, and in March alone, we have been tracking 16 relevant threats targeting Ukraine, with the potential to impact the rest of the world. Below are the list of threat actors and vectors associated with this cyber warfare:

DirtyPipe Vulnerability in the Linux Kernel

On March 7, a researcher from CM4All publicly disclosed a vulnerability identified as DirtyPipe, and tracked it as CVE-2022-0847 on the Linux kernel version 5.8 and later. This vulnerability allows local attackers to bypass any file permissions, write arbitrary data to any file and gain root privileges in the victim’s system. The CVE-2022-0847 vulnerability has a CVSS score of 7.8 (high) and is named DirtyPipe due to its similarity with the Dirty Cow (CVE-2016-5195) vulnerability.

Researchers at Cisco Talos came across a campaign controlled by multiple subgroups operating under the MuddyWater threat group. The majority of the targets have been based in Turkey and the Arabian Peninsula. In their most recent campaign, the threat group leveraged malware-laced documents, which are delivered via phishing messages to deploy a remote access Trojan called SloughRAT, which is identified as Canopy by CISA. The subgroups involved are highly motivated and share a purpose, ranging from espionage to a ransomware-targeted attack. As of publishing, their targets have been largely based in the Middle East, including Turkey, Pakistan, and Armenia. Based on the geolocation of the target, the attacker alters their tools and techniques.

Cyclops Blink malware, which is said to have ties with the Russia-backed Sandworm threat group, recently infected ASUS routers. This is the same malware which targeted WatchGuard devices just one month prior. Investigation by Trend Micro researchers states that more than 200 victims of the attack are estimated across the world, and include, but are not limited to, the United States, India, Italy and Canada. It is also noted that although Cyclops Blink is a state-sponsored botnet, they continued to select and attack specific firms such as ASUS and WatchGuard. This is converse to their activity as of late, in which they generally target critical infrastructure or service disruption. The main motive behind the compromise of these routers is to create a chain of Command and Control (C2) servers, which would assist the attacker in leveraging the botnet for additional malicious activity, including an expanded distributed denial of service (DDoS) attack.

On March 22, 2022, the LAPSUS$ extortion threat actor group claimed to have access to Superuser/Admin accounts on multiple Okta systems, claiming that they did not exfiltrate any data directly from Okta, as their focus is on Okta customers and their data. In response to the LAPSUS$ claims, Okta disclosed that between January 16 and January 22, 2022, the alleged attacker had access to a customer support engineer’s laptop working for a third party provider. Okta investigations have not identified any further evidence of current malicious activity, but stated that an estimated 2.5% of their customers potentially had their tenant accessed by the actor.

For a full list of the search queries used on the Autonomous Threat Sweeper to sweep for these threats detailed above, refer to our Github page. The page also references a list of relevant policies with the attacker group.